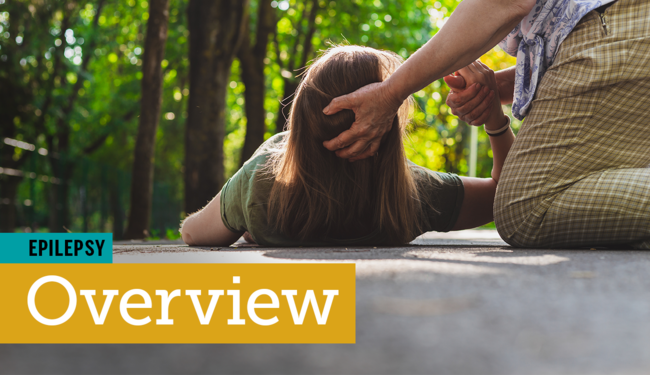 Epilepsy is not one single condition. Rather, it is defined as a spectrum of disorders that involve abnormal activity within the brain. “Epilepsy” means the same thing as the term “seizure disorders.” In epilepsy, abnormal brain waves disturb electrical activity, leading to seizures. Symptoms of epileptic seizures include having unusual sensations or emotions, behaving in unusual ways, or experiencing convulsions or loss of consciousness. Brain damage, illness, and irregular brain development can all cause abnormal brain waves that lead to seizures.

Approximately half of all people who have had one seizure will have more (typically within six months). However, in order to be diagnosed with epilepsy, a person must have had more than one seizure, and doctors must consider it likely that they will continue to have seizures. When a person has a seizure that lasts for more than 5 minutes, or a person has more than one seizure within a 5 minutes period (without returning to consciousness between the seizures), it is called status epilepticus.

Some forms of epilepsy last for a limited time, although the condition is often lifelong. Although there is no cure currently for epilepsy, there are many treatments available for the condition. About 70 percent of people with seizures can control them with proper diagnosis and use of medication.

There are many different types of seizures, and some people with epilepsy will experience more than one type. Some examples of seizure types include:

The History of Epilepsy

People have been aware of epilepsy and seizures for millennia. A Babylonian medical textbook made up of 40 tablets and dating to 2000 B.C. contains a chapter that accurately describes many of the different types of seizures known today. However, seizures were thought to be supernatural in cause — each seizure type was associated with a different evil spirit or angry god — so the treatments prescribed were spiritual.

The word "epilepsy" comes from the Greek word “epilepsia,” meaning "to seize" or "to take hold of." By the 5th century B.C., the Greeks still considered epilepsy a "sacred" disease. Yet the renowned ancient physician Hippocrates described epilepsy as a brain disorder. This was a radical idea for the time. He recommended physical treatments while also recognizing that if the seizures became chronic, the disorder was incurable.

Despite Hippocrates’ writings, epilepsy continued to be considered a supernatural condition for the next two millennia. People with epilepsy were subjects of immense social stigma, treated as outcasts, and even punished as witches. In many places, people who suffered seizures were prevented from going to school, working, marrying, and having children. There were a few people with prominent positions thought to have had epilepsy — including Julius Caesar, Tsar Peter the Great of Russia, Pope Pius IX, and Fyodor Dostoevsky — but most people with epilepsy were prevented from living as full members of society.

Epilepsy in the 14th Century and Beyond

During the Renaissance, some scientists tried to prove epilepsy was a physical, not spiritual, illness. Then, in the 19th century, neurology became a recognized medical discipline and the idea of epilepsy as a brain disorder became normal in North America and Europe. In 1857, Sir Charles Lacock introduced bromide of potassium as the first antiepileptic drug (AED).

In 1873, a British neurologist named John Hughlings Jackson first described epilepsy as we understand it today. Jackson showed that seizures are caused by sudden, brief electrochemical discharges of energy in the brain. In 1909, the International League Against Epilepsy was founded as a global professional organization of epileptologists.

By the 1920s, Hans Berger, a German psychiatrist, had developed the electroencephalogram (EEG) to measure brain waves. It showed that each type of seizure is associated with a different brain wave pattern. The EEG also aided in the discovery that specific sites in the brain were responsible for seizures and expanded the potential for surgical treatments. Surgery became a more widely available option by the 1950s.

The Development of Antiepileptic Drugs

The medication phenobarbital was identified as an AED in 1912, and phenytoin (sold under the brand names Dilantin and Phenytek) was developed in 1938. Carbamazepine (sold under the brand names Tegretol and Carbatrol) was identified in 1953. These drugs have since been approved by the U.S. Food and Administration (FDA) and continue to be used today.

An accelerated drug-discovery process began in the 1970s with the creation of the Anticonvulsant Screening Program, sponsored by the National Institute of Neurological Disorders and Stroke. The program helped scientists gain a better understanding of the brain and epilepsy. Scientists have strived to reduce serious side effects associated with the use of older AEDs through drug-development processes.

Keppra (levetiracetam) was approved by the FDA in 1999. Several newer drugs, including Vimpat (lacosamide), Briviact (brivaracetam), and Aptiom (eslicarbazepine acetate), have been introduced in the past 10 to 15 years. Other promising medications are also in the pipeline.

The stigma around epilepsy has lessened as more people are able to effectively treat their seizures. However, epilepsy largely remains an “invisible” illness. Millions of people in developing countries do not have access to AEDs, and stigma and discrimination are still widespread, especially in places where people still believe that seizures have a supernatural cause.

How Common Is Epilepsy?

People of all backgrounds, races, ethnicities, and ages are equally affected by epilepsy. It is estimated that epilepsy affects 1.2 percent of the population of the United States and more than 50 million people worldwide, making it one of the most common neurological disorders. Approximately 45,000 children under the age of 18 are diagnosed with epilepsy every year in the U.S., and roughly 10.5 million children worldwide live with epilepsy.

Neuroimaging capabilities have improved over the past few decades. Magnetic resonance imaging (MRI), computerized tomography (CT) scans, and other techniques are able to detect more and more subtle brain lesions responsible for epilepsy.

Causes of epilepsy include a wide variety of brain-related issues, such as structural damage, infectious diseases (like encephalitis), and genetic anomalies. Risk factors for epilepsy include:

Read more about causes of seizures and epilepsy.

Learn more about seizure types and symptoms of epilepsy.

Seizure Types and Symptoms of Epilepsy