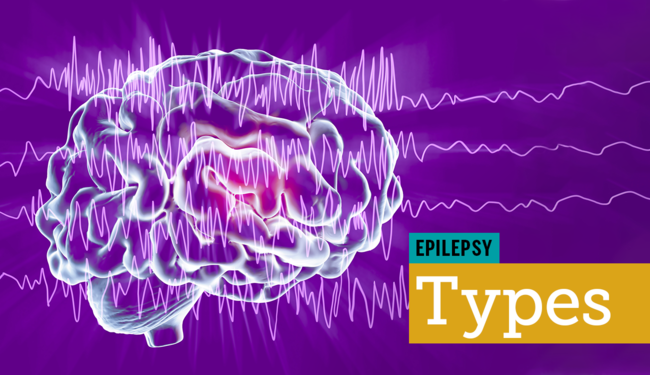 Epilepsy is a spectrum of neurological disorders that involve recurring seizures caused by abnormal electrical activity in the brain. Diagnosing the specific type of epilepsy helps you and your doctor better know what to expect regarding seizure progression, any challenges in learning and physical development, and which treatments will be most effective.

Each type of epilepsy involves specific types of seizures and other symptoms.

Approximately 60 percent of people with epilepsy have temporal lobe epilepsy (TLE), or seizures that originate in the temporal lobe of the brain. The temporal lobe is located on the sides of the brain, near the ears, and is responsible for processing sound and language as well as memories relating to sound and vision. About one-third of TLE or other cases of focal epilepsy are resistant to anti-epileptic drugs (AEDs). Surgery may be recommended, and vagus nerve stimulation may also be therapeutic.

TLE usually develops between late adolescence and early adulthood, often after a head injury or febrile (fever-induced) seizure. For women with TLE, hormonal changes during the menstrual cycle can increase seizure activity. Focal onset seizures are most common for people with TLE, though some people may experience prolonged seizures or, in rare circumstances, status epilepticus. Read more about seizure types and symptoms.

Frontal lobe epilepsy is the second most common form of focal epilepsy after TLE. FLE may be inherited, or it may be caused by a structural problem such as a birth defect, an abnormal blood vessel, trauma, or scaring caused by infection. In about 50 percent of FLE cases, no cause is ever determined.

The frontal lobes of the brain are large, and some of its functions include reasoning, paying attention, regulating emotion, organizing, and solving problems. Researchers have not discovered the functions of many areas. It is possible for a seizure to begin in the frontal lobe and proceed without symptoms before spreading to other parts of the brain, leading to a tonic-clonic seizure. FLE seizure symptoms can vary widely, depending on the function of the affected part of the lobe. Learn more about seizure symptoms and types.

FLE is usually responsive to medications, but in cases where AEDs are ineffective, surgery or vagus nerve stimulation may help.

Epilepsy that originates in the occipital and parietal lobes is much less common than TLE and FLE. Seizures that begin in these lobes are usually idiopathic – of unknown cause. The occipital lobe is in the back of the brain and is primarily responsible for vision. The parietal lobe is located on the top and upper sides of the head and is known as the “association cortex” because it is where perception becomes reality. Sounds are recognized as words, visual images are created, and touch becomes associated with an object.

In both types of epilepsy, AEDs are the first treatment option. If medication fails, surgery may be recommended.

Also known as early onset occipital epilepsy, PS commonly begins in early childhood. Typically, onset is between the ages of 3 and 10. PS affects boys and girls equally, and it is idiopathic (cause unknown). As many as 6 percent of children who have nonfebrile (not caused by fever) seizures have PS. PS frequently stops two to three years after the first seizure.

Children with PS will have focal seizures that can spread to a generalized seizure. Seizures in PS often last 20 to 60 minutes, and more than half occur during sleep. Pale skin, a sick feeling, and vomiting are typical symptoms during a PS seizure. Some children may also have tonic-clonic movements. Read more about types of seizures.

If seizures are infrequent, medication may not be needed. However, if they are needed, AEDs are usually effective at controlling PS seizures. Neurologists often teach parents how to initiate rescue therapy and create an emergency plan for children with PS.

Also known as benign epilepsy with centrotemporal spikes (BECTS), BRE usually begins around ages 6 to 8. Boys are slightly more likely to have BRE than girls. BRE accounts for approximately 15 percent of all epilepsies in children.

Benign rolandic epilepsy is characterized by numbness, twitching, or tingling of the face or tongue. Seizures may inhibit speech and cause drooling. The child remains conscious during the seizure. Seizures are not frequent and occur mostly at night. AEDs may be prescribed if the seizures happen during the day or disrupt sleep, but many children do not need medication. Seizures stop by early adolescence in almost all children with BRE.

JME, also known as Janz syndrome, begins between the ages of 8 and 26, but most commonly between the ages of 12 and 16. Absence seizures may be the first type of seizure most people with JME experience, although this type happens less often. Mild myoclonic seizures, generalized tonic-clonic (GTC), or clonic-tonic-clonic seizures (GTC seizures that begin with a clonic phase) seizures are the most common types. Myoclonic seizures tend to occur immediately upon waking in the morning. Photosensitivity – seizures triggered by flashing or flickering light – affects 40 percent of people with JME. Photosensitive seizures usually show on an electroencephalography (EEG) test. Read more about seizure types.

Most cases of juvenile myoclonic epilepsy are treatable with AEDs. Most people with JME need to remain on medication for life.

CAE accounts for 2 to 8 percent of childhood epilepsy. Childhood absence epilepsy typically begins between the ages of 3 and 11, most frequently between ages 5 and 8. One-third of children with CAE have a family history of seizures, suggesting that the cause may be genetic. Siblings of children with CAE have a 1-in-10 chance of developing epilepsy.

Children with CAE experience absence seizures (formerly known as petit mal seizures). The child is not aware or responsive during seizures, and may stare, blink, or roll their eyes up. You may notice a chewing motion or other repetitive movements. Seizures last about 10 seconds, after which the child immediately returns to normal. The child is usually not aware they have had a seizure. Seizures may be infrequent or happen as often as 100 times a day. One-third of children with CAE have concentration and memory problems before seizures start; these issues often improve after AEDs are started. Rarely, children who have very frequent seizures may develop learning difficulties.

JAE is similar to childhood absence epilepsy; however, it starts later in childhood (generally between ages 9 and 13) and is usually a lifelong condition. Two percent of people with epilepsy have juvenile absence epilepsy (JAE). Although it is rare to have a family history of seizures, the cause of JAE is thought to be genetic.

People with JAE experience absence seizures lasting from 10 to 45 seconds. Seizures may happen infrequently or 100 times a day. Seizures often happen during exercise. Seventy-five percent of those with JAE will also have tonic-clonic seizures. The risk of absence status epilepticus (also known as nonconvulsive status epilepticus), in which seizures can last minutes or even hours, is higher in people with JAE.

Children with JAE generally develop normally, though they may experience learning difficulties if they have frequent seizures. One-third of children with JAE have concentration and memory problems before seizures start; these issues often improve after AEDs are started. AEDs work well to treat JAE and must be taken for life.

LGS is an uncommon epilepsy syndrome; between 2 and 5 percent of children with epilepsy have LGS. Lennox-Gastaut syndrome often starts between the ages of 3 and 5. Atonic seizures, also known as drop attacks, are most common in children with Lennox-Gastaut syndrome (LGS). Seizures may happen multiple times a day and cause the child to suddenly drop to the ground. Drop attacks may be perceived as a trip or the result of poor balance. Injuries are common, making the seizures very upsetting for the child. Atypical absence seizures and tonic seizures are also common, especially at night, but children with LGS may experience other types of seizures as well.

LGS is very difficult to treat and is often referred to as intractable or refractory. Some AEDs can be effective, and the ketogenic diet may help. Surgery may be recommended if diet and medication do not work, though surgical treatment will not stop the seizures altogether.

Children with LGS have moderate to severe learning difficulties, with some children exhibiting developmental delays before their first seizure. Twenty percent of children who have West syndrome (infantile spasms) will develop LGS.

In progressive myoclonic epilepsies, seizures are difficult to control. As the condition progresses, people with PME accumulate cognitive (relating to thinking and memory) and motor (relating to movement) disabilities.

Medications may be successful at first, but effectiveness declines over months or years as the disease progresses.

Epilepsy is a broad spectrum involving dozens of neurological disorders. While those described above are the most commonly diagnosed, there are many other syndromes that cause epilepsy. Examples include Angelman syndrome, Doose syndrome (myoclonic astatic epilepsy), Dravet syndrome, neurocutaneous syndromes (such as Sturge-Weber syndrome), Rasmussen’s syndrome, and Rett syndrome.

Causes of Seizures and Epilepsy

In 2017, the International League Against Epilepsy (ILAE) released updated classifications for...

In 2017, the International League Against Epilepsy (ILAE) released updated classifications for...
read article >