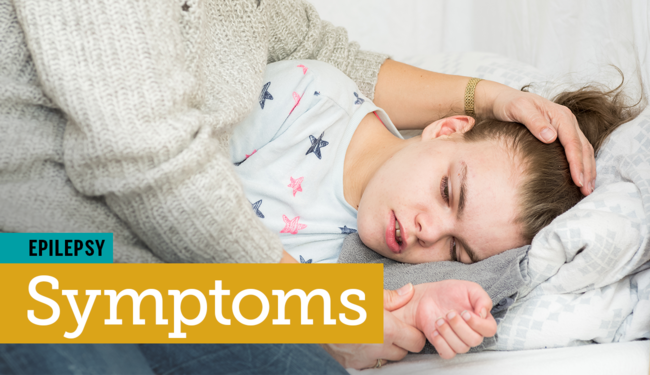 Epilepsy is a spectrum of neurological disorders and seizures that can affect any region of the brain. As a result, symptoms vary widely depending on the type of seizure. Most people will experience the same type of seizure each time, so symptoms should be similar from one seizure to the next. However, a person can have multiple seizure types.

There are many different kinds of seizures, but they can be classified into three main types:

These seizure types describe where in the brain the seizure starts, a person’s level of awareness during the seizure, and whether or not the seizure involves movement. The terminology used in this article is based on a new classification system developed in 2017 by the International League Against Epilepsy. You may also encounter older classification systems when reading about or discussing seizures.

Generalized tonic-clonic seizures were previously known as grand mal seizures. There are five distinct phases to this type of seizure, although not everyone will experience all five. During the tonic phase, the body, arms, and legs will flex, then straighten, then shake. In the clonic period, contraction and relaxation of the muscles follow. The seizure ends with the postictal period, during which fatigue, vision and speech problems, and head and body aches are common. Generalized tonic-clonic seizures may be preceded by an aura, which is sometimes actually a focal onset aware seizure. Tonic-clonic seizures may also cause vomiting and loss of bladder control.

Absence seizures, formerly referred to as petit mal seizures, typically last less than 30 seconds. Absence seizures cause a short period of staring and altered consciousness. Most likely, the person will remain standing or sitting upright. Their eyes may blink rapidly, or their face or mouth may twitch. After the seizure, they may not remember what just happened. Absence seizures may happen multiple times a day.

Atonic seizures or akinetic seizures (also called drop attacks) cause a sudden loss of muscle tone. A person may suddenly drop their head or fall from a standing position. During the seizure, the body will be limp and unresponsive.

Focal seizures affect only one part of the brain. In the past, focal onset seizures were referred to as partial seizures.

Focal aware seizures, previously called simple partial seizures, begin in one part or one group of cells of the brain. If a person is awake and aware during the seizure, it is called a focal aware seizure. Symptoms of a focal seizure vary depending on which part of the brain it affects but may include visual disturbances, isolated muscle twitching, sweating, nausea, intense emotions, or unusual sensations. Focal aware seizures can sometimes precede a tonic-clonic seizure, leading some people to regard them as auras, warning signs, or premonitions of an oncoming generalized seizure.

During focal impaired awareness seizures, formerly referred to as complex partial seizures, a person may be confused, appear awake but be unresponsive, or become unconscious. Other behaviors during focal impaired awareness seizures may include chewing, gagging, laughing, crying, screaming, or running. These seizures last between 30 seconds to one minute. After the seizure, extreme fatigue is common.

Sometimes, it is not known how or where the seizure begins. A doctor may be able to diagnose an unknown onset seizure later as a focal or generalized seizure if more information is learned.

In some people with epilepsy, certain circumstances can trigger a seizure. Triggers vary from person to person, but the most common are:

Identifying seizure triggers allows a person with epilepsy to avoid their triggers and hopefully to have fewer seizures. Keeping a seizure diary is a good way to identify triggers. When a seizure occurs, note the date and time, any special situations surrounding the seizure, and how it felt. There are many apps and websites that can help you track seizures and triggers.

Stress causes brings on the seizures a lot of times. And when I get all stressed out It does not help things .

Brooke Dulka, Ph.D. is a freelance writer at MyHealthTeams. Learn more about her here.

Epilepsy includes a spectrum of seizure disorders caused by abnormal electrical activity in the...

Epilepsy includes a spectrum of seizure disorders caused by abnormal electrical activity in the...
read article >