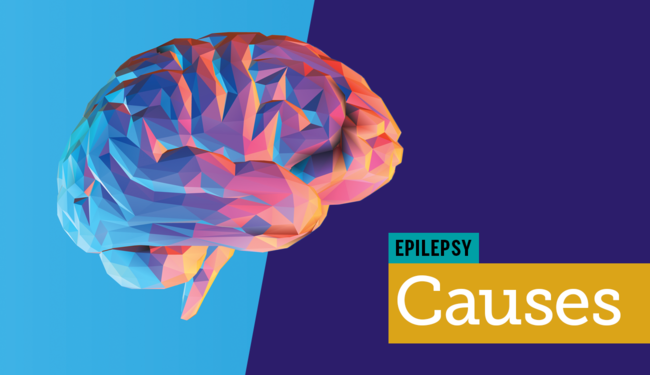 Epilepsy refers to a spectrum of neurological disorders that involve recurring seizures. It is also possible to have non-epileptic spells — events that are not caused by an epileptic disorder. Epilepsy has many different causes.

Epilepsy can be broken into two broad categories depending on whether the cause of seizure activity is known or unknown. When the cause of a person’s epilepsy is known, it is called symptomatic or secondary epilepsy. Epilepsy with unknown causes is referred to as idiopathic or cryptogenic epilepsy. Some epilepsy is inherited or due to a genetic mutation. In other cases, epilepsy is structural in origin, resulting from brain damage or abnormal brain development. Epilepsy is not contagious.

Causes of epilepsy are often linked to the person’s age at diagnosis. In infants who have seizures, the cause is usually genetic or due to brain damage that happened during pregnancy or birth. In children, the cause of epilepsy could be genetic or due to fever, infection, or brain tumor. In people over the age of 25, most epilepsy is caused by tumor or brain damage resulting from a stroke or traumatic brain injury.

About 4 percent of people — or 1 out of 26 — will develop epilepsy at some point in their lives. Having a first-degree relative (parent, child, or sibling) with epilepsy increases your risk of epilepsy three-fold. It is common for family members who have epilepsy to have different types from one another. When a disorder or disease tends to run in families, there is thought to be a genetic component. In fact, genes are now known to play a role in approximately 30 percent to 40 percent of epilepsy cases.

Many cases of epilepsy are caused by a gene mutation, usually on a gene responsible for the activity of neurons in the brain. Mutations here are what cause the bursts of electrical activity that causes the different symptoms associated with seizures. However, many people with a genetic mutation will never have seizures or develop epilepsy. This indicates that genes are not the only factor, and that environmental factors also play a role.

Read more about other genetic causes of epilepsy.

There is also an association between autism spectrum disorder (ASD) and epilepsy. Approximately one-third of people on the autism spectrum also have epilepsy. Certain genetic syndromes, including Rett, fragile X, Prader-Willi, and Angelman syndromes, are associated with both seizures and autism.

Some researchers believe there may be a genetic component to all forms of epilepsy. In this theory, everyone who has seizures is genetically predisposed to have seizures. If this is the case, when seizures begin after a brain injury or other structural change, it may be due to both the injury or change and the person’s genetic predisposition to seizures. This theory might explain why a brain injury might lead to epilepsy in one person and might not cause epilepsy in another person.

Structural problems may be congenital (present at birth) or caused later by brain tumors or traumatic brain injuries. Some of these causes of traumatic brain injury and epilepsy include automobile crashes or accidents that result in head injury. Strokes, brain infections (such as meningitis), and alcohol or drug abuse can also result in a structural problem that causes seizure activity. In situations like these, normal brain structure is distorted or disrupted, resulting in abnormal brain waves that trigger seizures.

Inflammation, which may occur as a result of a traumatic brain injury or a chronic inflammatory condition such as lupus, can also flood the brain with proteins that may trigger seizures.

Congenital brain damage may be caused by malnutrition, infection, trauma, or drug use during pregnancy. It may also be due to a genetic defect. Children who are born prematurely or deprived of oxygen during birth can develop brain damage that causes seizures. Many newborns outgrow their seizures, but a small number will have seizures that can be lifelong and difficult to treat.

Typically, 50 percent to 70 percent of children who have epilepsy will eventually achieve seizure remission. The chances for remission are higher if seizure frequency is low, seizures are well treated by antiepileptic drugs, and there are no underlying neurological problems.

Other Risk Factors for Epilepsy and Seizures

It is important to keep in mind other risk factors for epilepsy. Different types of seizures might have different risk factors.

For instance, major risk factors for absence seizures (where the person experiences a loss of consciousness) include:

Sometimes, older age can be a risk factor for epilepsy or seizure. For example, Alzheimer’s disease is associated with seizure activity and epilepsy.

Approximately 50 percent of all epilepsies have unknown causes. Certain types of seizures may stem from a scar or irritation on the brain, but the scar is undetectable by an MRI. As brain imaging techniques improve, more causes of seizures will be identified.

Seizure Types and Symptoms of Epilepsy