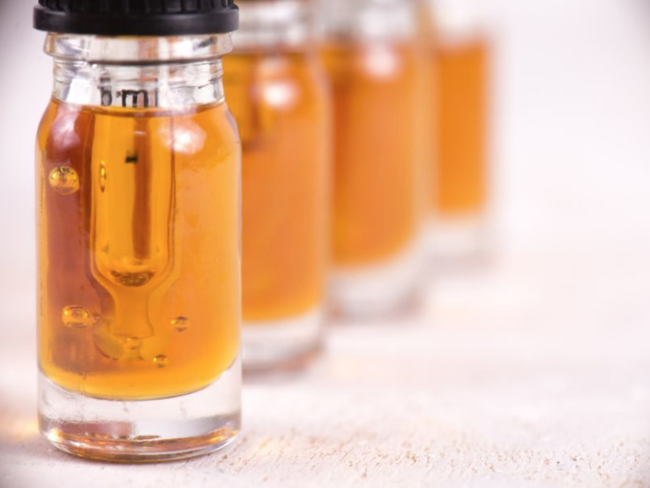 By Dennis Thompson, HealthDay Reporter THURSDAY, Nov.1, 2018 (HealthDay News) -- The first Food and Drug Administration-approved drug containing an ingredient derived from the marijuana plant is on sale in the United States.Epidiolex is a twice-daily oral solution -- a cannabidiol, or CBD liquid -- made by Britain-based GW Pharmaceuticals. It is approved for use in patients 2 years old and older with two types of epileptic syndromes, Dravet syndrome and Lennox-Gastaut syndrome.

"Because these patients have historically not responded well to available seizure medications, there has been a dire need for new therapies that aim to reduce the frequency and impact of seizures," Justin Gover, CEO of GW Pharmaceuticals, said in a written statement.The FDA approved Epidiolex in June. CBD is derived from the cannabis plant but it does not create any "high" in users. CBD oils and other CBD products have become popular across the United States in recent years, for the treatment of pain and other issues.This was the first time the FDA approved such a product for any medicinal use, however. In a statement, agency Commissioner Dr. Scott Gottlieb said regulatory approval and oversight is important to safeguard patients."Because of the adequate and well-controlled clinical studies that supported this approval, prescribers can have confidence in the drug's uniform strength and consistent delivery," he explained.An FDA advisory panel unanimously recommended in April that Epidiolex be approved for use in the United States.Low doses proved effectiveAlthough CBD oil has become a trendy cure-all, treatment of epilepsy is the only use that has garnered significant scientific evidence supporting its usefulness.Epidiolex made headlines in May when a clinical trial found that even low doses of the drug could help patients with epilepsy.In the trial, patients taking a 10-milligram (mg) daily dose of pharmaceutical-grade cannabidiol experienced nearly as great a reduction in seizures as patients on 20 mg, and with fewer side effects, said the lead researcher of that study, Dr. Orrin Devinsky. He directs NYU Langone's Comprehensive Epilepsy Center in New York City.This was the third clinical trial to show that Epidiolex is useful in treating two rare forms of epilepsy, Lennox-Gastaut syndrome and Dravet syndrome, Devinsky said.GW Pharmaceuticals funded the clinical trial. It compared two different doses of Epidiolex head-to-head and against an inactive placebo, Devinsky said.A total of 225 patients suffering from Lennox-Gastaut syndrome were divided into three groups. Those taking 20 mg of Epidiolex a day had 42 percent fewer seizures, on average, compared with 37 percent fewer seizures in the group taking 10 mg of the drug, and a 17 percent reduction in the placebo group.Bigger dose not necessarily betterBut while the 20-mg dose was slightly more effective, it was not the first choice of parents, Devinsky said."When parents were asked to rate how their children did best, they actually had a slight preference for the 10-mg dose without knowing what it was," he added.That's because these children did not experience as many side effects from the cannabidiol, which can include tiredness, decreased appetite, diarrhea and signs of possible liver damage, Devinsky explained."They got the vast majority of the benefits with fewer of the side effects," he said.The study also showed that Epidiolex is a safe treatment, with only seven patients dropping out of the trial due to side effects -- six from the 20-mg group and one from the 10-mg group."Compared to other drugs used to treat epilepsy, I think Epidiolex, which is 99-percent pure cannabidiol, has a better side-effect profile than many of the available drugs," Devinsky said.Still, the FDA noted in its approval statement that side effects could occur, such as sleepiness, lethargy, poor appetite and infections, among others. And like other drugs that treat epilepsy, Epidiolex will come with a special warning that use may be tied to a higher odds of depression, aggression and suicidal thoughts.Best for severe casesAccording to Dr. Angel Hernandez, of the Helen DeVos Children's Hospital in Grand Rapids, Mich., these results prove that pharmaceutical-grade CBD helps suppress seizures and "increases our options to treat many of these patients with very, very difficult-to-control epilepsies." Hernandez is division chief of neuroscience at the hospital."We're talking about types of epilepsy that are extremely difficult to treat with medication," he said. "Most of these children and adults do not respond to normal pharmacological treatment."No one is exactly sure why CBD has this beneficial effect, both Devinsky and Hernandez said. It appears to work on receptors that alter brain chemistry in a way that reduces the chances of a seizure.The doctors noted that these effects were seen in patients taking a highly refined form of CBD produced by a drug maker. It's not known whether patients in states where medical marijuana is legal would see the same effects in CBD oil produced by small companies with no federal oversight.It's also not clear whether CBD would help people with more common forms of epilepsy. Devinsky said small clinical trials have so far found no benefit in people with focal epilepsy, where seizures start on one side of the brain."I think we need more studies," Devinsky said. "It's not been investigated in generalized epilepsy, and I think we need a larger study in focal epilepsy."SOURCES: GW Pharmaceuticals, news release, Nov. 1, 2018; U.S. Food and Drug Administration, news release, June 25, 2018; Orrin Devinsky, M.D., director, NYU Langone's Comprehensive Epilepsy Center, New York City; Angel Hernandez, M.D., division chief, neuroscience, Helen DeVos Children's Hospital, Grand Rapids, Mich.; May 17, 2018, New England Journal of Medicine, online

Here are some questions and conversations from MyEpilepsyTeam:

• Has anyone Heard of a new AED med called Epidiolex?

• Has anyone tried Epidiolex the new CBD med ?

• Has anyone heard the good news about a new approved epilepsy prescription (Epidiolex)?

• "BREAKING NEWS: The FDA has approved the use of Epidiolex (CBD) to treat Dravet and Lennox Gastaut Syndromes"

• "Very important question for everyone....has anyone ever heard of the medicine Epidiolex"?

Has CBD been effective in managing seizures for you or someone you care for? Share in the comments below or directly on MyEpilepsyTeam.

What are you thankful for?